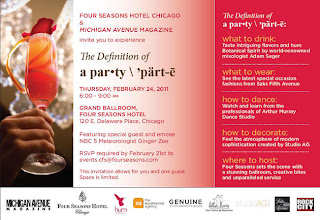 Michigan Avenue Magazine and the Four Seasons Hotel want to show you The Definition of a Party on Thursday, February 24th. In case you didn't know Michigan Avenue Mag throws some of the craziest parties around. They make a night in Charlie Sheen's hotel room seem like a Christian book club meeting. This event will take place at the Four Seasons Grand Ballroom and the host for the night will be potential baby mama candidate, Ginger Zee. Appetizers from the Four Seasons kitchen and special cocktails from Adam Seger will keep you nice and toasty all evening long. See more details after the jump.


Genuine Entertainment is proud to announce an exclusive event at

As you would expect, everything will be top notch in the Four Seasons Grand Ballroom Thursday, February 24th:

-Watch and learn from the professionals of Arthur Murray Dance Studio

The party is also being hosted by Michigan Avenue Magazine and The Experiential Agency.

Email events.cfs@fourseasons.com to RSVP for yourself and one guest. Space is limited and this one might fill up quickly!
Posted by Rome at 7:47 PM