Get a Little Buzz 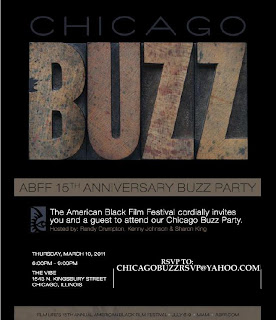 The American Black Film Festival (ABFF) is having its 15th Anniversary Buzz Party on Thursday, March 10th. The actual film festival will take place in Miami (of course) on July 6th, but it's not too early to get excited! I believe this event will be sponsored by Grey Goose so it should be a fun one.

Black History Fact #7: Before MTV and Johnny Knoxville came along there was another movie called "Jackass" that was based on the life and foolery of Alan Keyes.

For Complimentary Entry RSVP to chicagobuzzrsvp@yahoo.com
Posted by Rome at 1:30 PM