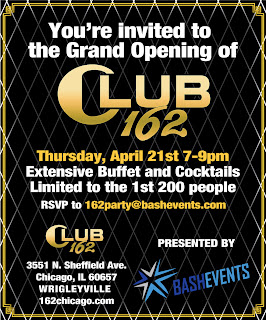 Club 162 is having its GRAND OPENING on Thursday, April 21st! There's only room on the guest list for 200 people so you better RSVP immediately! You'll probably want to get to this one EARLY if you want to take advantage of the free drinks and appetizer BUFFET. That's right, a buffet!  Bid farewell to those passed appetizers that you have to fight for by clawing and elbowing your way through a stampede of old women with their beady eyes and growling stomachs.