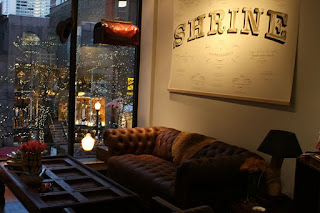 Shrine Haberdashery is celebrating its One Year Anniversary on Thursday, November 17th in the James Hotel! This event will feature 1920s style cocktails and appetizers (e.g. Prohibition Punch and Communist Croquettes), live entertainment and a fashion show.

RSVP to rsvp@shrinestyle.com by November 14, 2011. (Obviously the registration deadline was yesterday but I just found out about it. Don't email me death threats if you don't get accepted!)
Posted by Rome at 8:11 PM