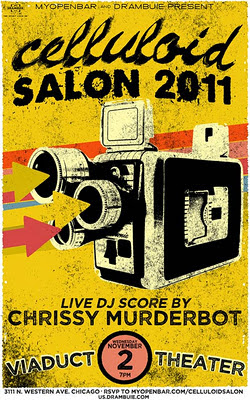 Celluloid Salon 2011, sponsored by Drambuie and MyOpenBar.com, is gonna be bananas! For all you squares that means “awesome”. On Wednesday, November 2nd, the Viaduct Theater will host an evening of drunkenness and cinematic confusion when it showcases 4 vintage short films with a contemporary score composed by Chicago’s own DJ Chrissy Murderbot! I dare you to tell me that's not the best DJ name ever. I attended this event last year at the Chopin theater and I was quite drunk impressed. Free booze, food and entertainment! There will be a lot of hipsters in the building so be sure to dress the part with your little brother’s jeans and multiple neon-colored snap bracelets.

Check out the program below!

The program includes:
Posted by Rome at 5:01 PM