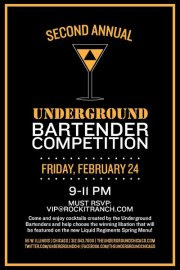 The Second Annual Underground Bartender Competition is going down at Underground on Friday, February 24th. The bartenders at this popular, yet often douchey club, will compete to have their unique cocktails featured on the new spring menu, and you get to help judge the winner! I assume the drinks will be complimentary, however they might be limited.

Fellas, make sure you go with a group of girls, or befriend a few very quickly to ensure that you gain entry and are able to drink as much as possible. I have always been amazed at how quickly and cunningly women are able to maneuver to the front of a crowd to get to the bar, regardless of the number of people waiting in line. They're like running backs breaking through a defensive line, without the brute force, agility, or risk of concussions. Unless you look wealthy or personally know the bartender, there's a 75% chance that the girl who just slid up next to you at the bar will get served before you. It doesn't matter that you've been standing there for 10 minutes gesturing and trying to establish eye contact, inevitably imagining how satisfying it would be to lasso that asshole around the neck with your skinny tie, bang his head against the bar, grab a bottle of scotch, pour yourself a double, and then throw a crinkled up dollar bill in his face! That's not something that I would do, of course, as I am much too classy.

RSVP to VIP@rockitranch.com
Posted by Rome at 1:52 PM